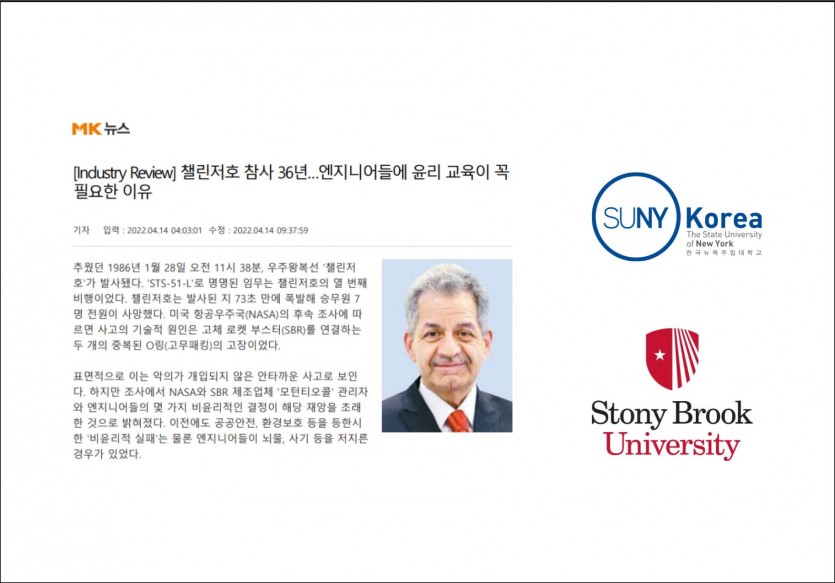 On a cold day on January 28, 1986, at 11:38 am, the Space Shuttle Challenger was launched from Kennedy Space Center. The mission designated as STS-51-L was the tenth flight of the Challenger. The orbiter broke apart 73 seconds into the flight, killing all seven crew members. A subsequent investigation by NASA determined that the technical cause of the accident was the failure of two redundant O-ring seals joining the solid rocket boosters (SBRs).

On the surface, this appears to be an unfortunate accident where no malice was involved. Investigation however showed that a series of carless, sometimes self-serving, and unethical decisions were made by managers and engineers of NASA and Thiokol, the SBRs manufacturer, which led to this disaster. Several other notorious and high-profile incidents involving ethical failures such as disregarding public safety, environmental protection, fairness, honesty in research and testing as well as bribery, fraud, and conflicts of interest, on the part of engineers, have been documented in previous years.

These problems have raised an important question for engineering educators. Engineers perform works that significantly impact the environment, and public safety, and also have major financial and economic consequences. These conflicting aspects sometimes present ethical dilemmas for engineers.  Are engineering students trained and prepared for confronting and resolving such ethical dilemmas in their work? To address this challenge, led by the ABET (ABET.org) the body responsible for accrediting undergraduate engineering programs in the United States, engineering programs in the US are mandated to incorporate engineering ethics in their curricula.

It is important to note that these codes are guidelines and do not cover every potential ethical dilemma that may be faced by an engineer. Their applications often require a subjective review of the problem. They also sometimes present apparent conflicts when applied to a problem. For example, one of the NSPE Fundamental Canons states that engineers should “hold paramount the safety, health, and welfare of the public”.  Professional Obligation section of the same code however states that “Engineers shall not disclose without consent confidential information concerning the business affairs or technical process of any present or former clients or employers or public body on which they serve”. The dilemma presented here is, for example, when Thiokol engineer Roger Boisjoly was aware of potential problems with the O-ring in the booster, was he ethically bound to disclose that to the public without the consent of his employer?

Situations like that require students to develop ethical problem-solving skills. Elements of ethical problem solving include understanding both the factual and conceptual issues of the problem, identifying the moral principles to use, and developing a systematic approach to applying these principles. Most problems have a clear ethical answer. Safety health and welfare of the public clearly supersede the professional obligation of confidentiality to an employer. There are however situations when the answers are not as clear.

Practicing engineers are well-advised to understand and follow relevant professional codes of ethics in order to protect society, themselves, and their employers from serious negative consequences. Engineering curricula must train students on the analytical skills that are required for addressing ethical questions that are faced by engineers.